The Instant Group has released its latest research report on the French flexible workspace industry.

The research shows that France is experiencing a phenomenal increase in the supply of flex spaces across the country, with the number of locations increasing by 20% YOY. Other key findings include: 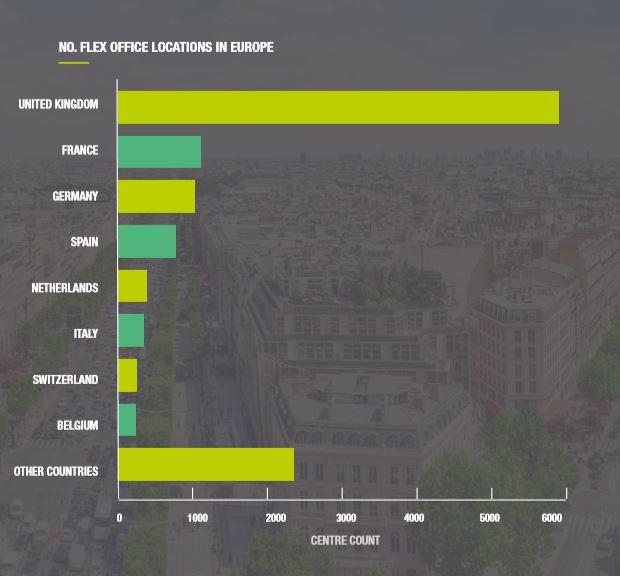 Where Paris is by far the largest market within France, Germany’s office market is much more fragmented, spreading across Berlin, Hamburg, Düsseldorf and Stuttgart. The secondary markets of Lyon and Toulouse are the fastest growing French markets, after Paris, but the largest growth percentage was seen in Bordeaux, at 157%.

According to the data, Paris is striding ahead of Berlin in terms of market share, with over 50% more flexible offices. Where Paris is by far the largest market within France, Germany’s office market is much more fragmented, spreading across Berlin, Hamburg, Düsseldorf and Stuttgart. The secondary markets of Lyon and Toulouse are the fastest growing French markets, after Paris, but the largest growth percentage was seen in Bordeaux, at 157%.

Steven Khoury, Head of France & Client Solutions Europe, says: “Brexit is very much driving the growth of flex space in EU markets, a trend that began when it was first announced in 2016. We’ve seen demand steadily climb as companies look for new cities to put down their roots and as a result, the level of demand for flex workspace in France is now only two to three years behind the UK.

“Blue-chip clients looking to drive more agility into their office portfolio are driving a significant portion of the demand, choosing to remain nimble in uncertain times. Around 4% of requirements for Paris in the last 12 months were for 25+ desks and it is this demand for larger space from corporate companies that is proving to be the biggest challenge for flexible operators in Paris.”

This increased demand has resulted in considerable price fluctuations within the French market and in the last 12 months Paris has seen some particularly high desk rates achieved; with a minimum desk rate of €190, average €760 and maximum of €2,000. Alongside New York, San Francisco and London, these rates make Paris one of the most expensive places in the world to rent a desk, with demand on the rise.

With an increasing number of companies considering flex space in France, it is the established operators who are seizing the opportunity. Regus currently has the largest slice of the French flexible office market, with a 13% share of supply. The remaining top five operators account for just 10% meaning that the rest of the market is made up of smaller, independent operators and traditional landlords who are realising the need to diversify their portfolios in order to attract occupiers. 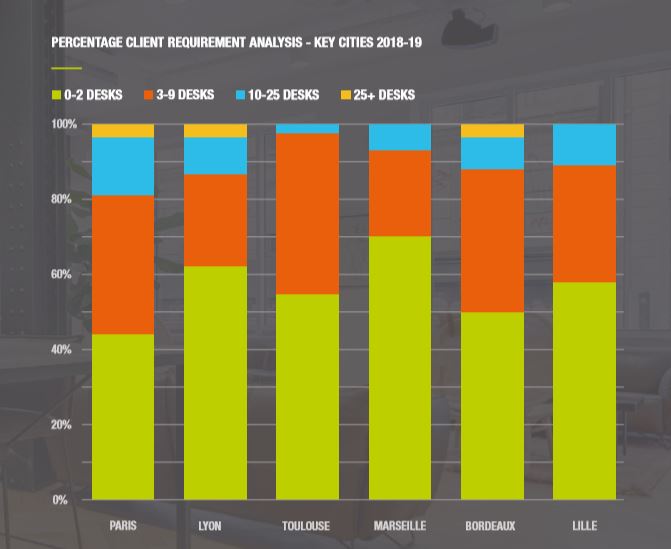 Marie-Fanny Barrois, Head of Serviced for France, adds : “The largest growth lies within the hybrid spaces (flexible offices and coworking) and serviced office markets which grew by 12% and 10% respectively. Twenty per cent of new centres opened last year were coworking and Instants prediction is that this market will rapidly expand over the next 12 months to mirror its European neighbours.

“The flex market is really driving the dynamics of the conventional office market, offering a fast, agile route to market for companies of all sizes. The client demand is there, and this will only increase as larger organisations work flex options into their processes. The next stage of growth for the French market is dependent on the ability of the flex workspace market to produce enough supply to match that demand. Something that can only be gained through better collaboration between landlords and operators.”

The next step in the market’s ability to service larger, corporate clients and their demand for more space will see a move to more “Space as a service” solutions. These solutions see specialist third party suppliers sourcing and operating flexible space on behalf of corporate clients and, in effect, disaggregating the relationship between landlord and occupier, and removing the need to self-deliver space. We have seen the number of such solutions increase rapidly in NYC and London as the markets mature, and corporates begin to look for bespoke solutions to flexible workspace requirements. Given the constraints of space in Paris, this would appear to be a natural solution for clients seeking to gain access to the market but wanting to move away from the conventional, leased market.

France Flex Market Snapshot 2020
INDU
STRY
By continuing to browse or by clicking “Accept All Cookies,” you agree to the storing of first- and third-party cookies on your device to enhance site navigation, analyse site usage, and assist in our marketing efforts. Privacy and Cookie Policy
×